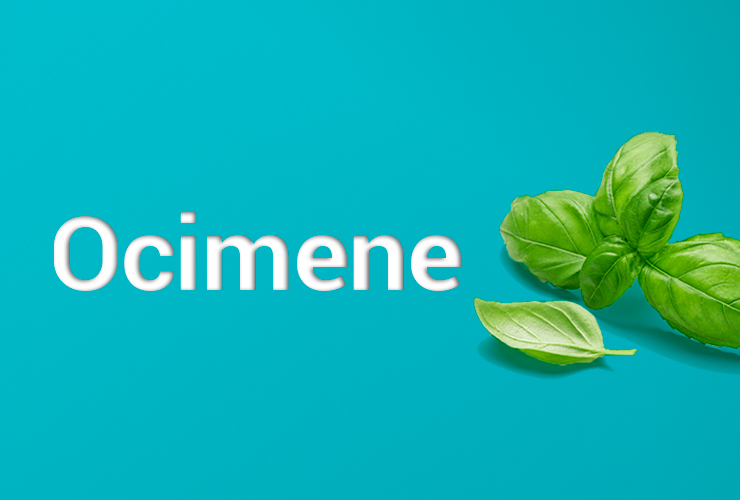 Ocimene is one of more than 200 terpenes discovered to date in hemp and cannabis. Terpenes are aromatic molecules once thought to convey only aroma (as part of the evolutionary defense mechanisms of herbs and other plants). In recent years, however, much clinical research has revealed the medicinal efficacy of molecules such as ocimene.

This terpene features a sweet aroma that is floral and herbaceous in nature, sometimes with a hint of citrus. Ocimene is produced by a variety of plant species other than hemp and cannabis, including allspice, basil, bergamot, bigarde, ho leaf, kumquat, lavender (which also produces the terpene linalool), mango (also a source of myrcene), mint, orchid, parsley, pepper, and petitgrain.

Like other terpenes, ocimene has been found to provide a wide range of medicinal benefits, including anti-inflammatory, antibacterial, antifungal, antiseptic, antiviral, and even decongestant properties (related to its ability to decrease systemic inflammation).

Through anecdotal evidence and formal research studies, ocimene has been shown to be a potential agent in the fight against a variety of diseases and conditions, including type-2 diabetes, malaria, hypertension, and the Severe Acute Respiratory Syndrome (SARS) virus.

It’s relatively powerful anti-inflammatory and antiviral properties mean that ocimene may play a role as a support therapy, in conjunction with other treatments, for a variety of viral infections and conditions based in inflammation (such as arthritis and fibromyalgia).

A 2014 research study entitled “Chemical Composition and Anti-inflammation Activity of Essential Oils from Citrus Unshiu Flower” that was published in the journal Natural Product Communications investigated the ability of a range of terpenes, including terpinene, alpha- and beta-pinene, limonene, and ocimene to provide “medicinal functions.”

Another 2014 study entitled “Biological Activities and Composition of Ferulago carduchorum Essential Oil” that was published in the Journal of Arthropod-Borne Diseases researched the medicinal efficacy of the essential oil F. carduchorum, which contains relatively large quantities of ocimene and pinene. The scientists were specifically investigating these terpenes for their antioxidant and antimicrobial properties.

The study revealed that this oil was roughly 85 percent terpenes (43 percent ocimene and 18 percent pinene), further exemplifying that essential oils from a variety of herbs and plants are an abundant source of terpenes for the formulations of wellness products.

Reported the study’s authors, “The essential oil had noticeable efficiency against Candida albicans [a fungal infection] and was effective against Anopheles stephensi [a form of malaria].”

A 2013 study entitled “Antioxidative Properties and Inhibition of Key Enzymes Relevant to Type-2 Diabetes and Hypertension by Essential Oils from Black Pepper” that was published in the journal Advances in Pharmacological Sciences explored the ability of terpenes (such as ocimene) found in black pepper to fight type-2 diabetes.

Reported the study’s researchers, “Conclusively, the…antioxidant activity…by the essential oil extract of black pepper could be part of the mechanism by which the essential oil could manage and/or prevent type-2 diabetes and hypertension.”

A 2008 study entitled “Phytochemical Analysis and In Vitro Antiviral Activities of the Essential Oils of Seven Lebanon Species” that was published in the journal Chemistry & Biodiversity investigated the antiviral properties of a group of terpenes—including alpha-pinene, beta-pinene, cineole, and ocimene—in the fight against SARS.

Reported the researchers, “L. nobilis [essential] oil exerted an interesting activity against SARS.” In addition, the study revealed that the terpenes found in another essential oil, oxycedrus oil, also exhibited antiviral properties. Wrote the study’s authors, “Oxycedrus oil, in which alpha-pinene and beta-myrcene were the major constituents, revealed antiviral activity against HSV-1.”