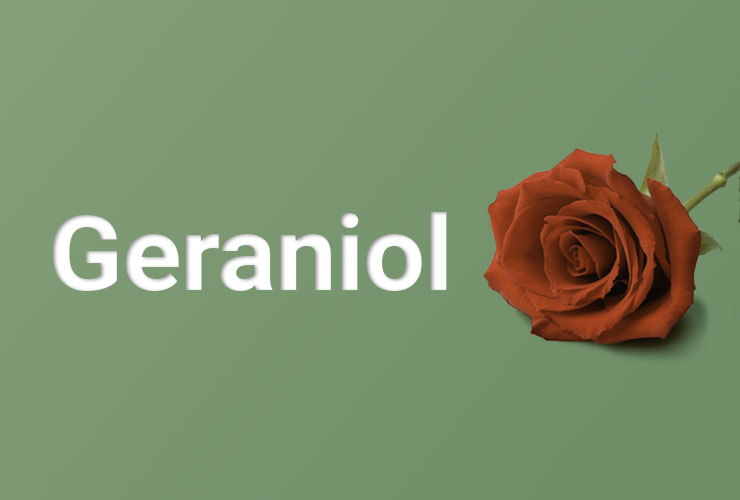 Welcome to Strainprint Technologies’ Understanding Terpenes Series, an ongoing collection of science- and research-based articles regarding the medicinal and therapeutic benefits of hundreds of wellness components from the cannabis plant.

Terpenesare the special molecules responsible for the sometimes pungent aroma of mature female cannabis plants and post-harvest loose-leaf flower. These organic compounds do more than merely tickle the olfactory, however. Like their chemical cousins from cannabis called cannabinoids, terpenes offer a wide range of medicinal efficacy to both patients and adult use consumers.

What is the Endocannabinoid System?

Before exploring the specific characteristics and potential medicinal benefits of the terpene geraniol, it is helpful for readers to understand the biophysical environment and overall dynamics of how such molecules interact with the bodies of humans and common pets such as dogs and cats.

A range of research studieshas revealed that terpenes and cannabinoids engage in a delicate and nuanced interaction that has been dubbed the entourage effect. It occurs within a body-wide system of microscopic cellular receptors and neurotransmitters called the endocannabinoid system(ECS or eCS).

The entourage effect is a theory that stipulates that cannabinoids and terpenes commingle in various ways to create enhanced efficacy and other synergistic benefits in the body of any mammal. In a nutshell, this theory purports that the combined benefits of these molecules are greater than the sum of their individual, or isolated, efficacies. In other words, this theory embraces the proverbial saying that “the whole is greater than the sum of its parts.” (Further explorations of this topic by readers should include the issues of bioavailabilityand subjective efficacy.)

To learn more about terpenes and how they interact with the human ECS, see the following educational articles. They serve as supplements and instructional prerequisites to Strainprint’s Understanding Terpenes Series:

Geraniol is one of the 200 terpenes produced by the cannabis genome, many of which have been revealed—via both clinical research and the anecdotal testimonies of physicians and patients—to deliver significant medicinal powers. Like other terpenes produced by cannabis, this molecule offers a range of notable and alluring fragrances, depending on the terpenes with which it is commingled and their precise ratios to one another.

Geraniol was discovered and first isolated in 1871 and is considered a secondary terpene because it is less common and typically available in lower volumes than siblings that are labeled primary terpenes (including myrcene, pinene, and limonene).

This aromatic compound is utilized by various industries as a fragrance ingredient in a range of consumer products, including candles, colognes, detergents, lotions, and perfumes. Geraniol is also employed as a food additive, particularly in sweet desserts such as pastries.

This useful terpene conveys an aroma and floral profile that is sweet and delicate, with hints of citrus and rose. This important terpene is responsible for the biosynthesis of several other terpenes, including myrcene and ocimene.

Other than cannabis, the terpene geraniol is produced by a variety of plant species, including blackberries, blueberries, carrots, coriander, ginger, grapefruit, lavender, lemon, lemongrass, lime, nutmeg, orange, and rose oil.

Interestingly, this chemical is also produced by honey bees. For these insects, geraniol serves as a homing mechanism for nectar-bearing fruits and as a means of preventing dangerous competing bee colonies from stealing a valuable pollination site.

Like other terpenes, geraniol has been shown to provide improvements to health and wellness in a variety of ways, including potential efficacy for major diseases like cancer and diabetes and conditions such as pain, inflammation, and bacterial infections.

The anti-inflammatory powers of geraniol make it an effective element in the fight against a variety of diseases based in or strongly characterized by this condition. This includes arthritis, fibromyalgia, and multiple sclerosis.

Geraniol has also demonstrated efficacy against hyperglycemia, fungal infections, and ulcers. Its proven antioxidant and neuroprotective properties mean that it may be an effective tool against diseases such as Alzheimers and Parkinsons.

A variety of studies spanning back more than 30 year have revealed the eclectic medicinal potential of the terpene geraniol to treat a variety of diseases and conditions, including cancer, diabetes, bacterial and fungal infections, pain, and inflammation.

A 2017 researchstudy entitled “Geraniol Ameliorates Hyperglycemia by Attenuating the Key Enzymes of Carbohydrate Metabolism in Streptozotocin-induced Diabetic Rats” that was published in the journal Pharmaceutical Biologyinvestigated the ability of geraniol to improve and balance insulin levels in diabetic rodents.

The study’s authors concluded that, “The present findings suggest that geraniol can potentially ameliorate key enzymes of glucose metabolism in experimental diabetes,” and that clinical studies to evaluate this possibility are needed to further investigate the exact mechanisms underlying these results in an effort to create useful therapies, regimens, and drugs for patients.

A 2015 studyentitled “Geraniol, a Component of Plant Essential Oils—A Review of its Pharmacological Activities” that was published in the International Journal of Pharmacy and Pharmaceutical Sciencesinvestigated the overall medicinal efficacy of the terpene geraniol.

The researchers found a variety of positive medicinal uses for geraniol, including antibacterial, antiseptic, and anti-inflammatory characteristics. In addition, this study found this terpene to provide anti-ulcer activity, neuroprotection, and antioxidant properties.

Most significant among the potential medicinal benefits of geraniol was its anti-cancer efficacy. Reported the study, “Geraniol has antibacterial, antiseptic, anti-inflammatory, [and] anticancer [properties] against leukemia, hepatoma, melanoma, and pancreatic cancer cell lines.”

The study further identified the specific role of geraniol in cancer cell apoptosis, a form of genetically pre-programmed cellular suicide that is triggered by several cannabinoids and terpenes produced by cannabis. “Geraniol inhibits cancer cell proliferation and DNA damage while induction of apoptosis specifically related to anticancer effect against initial phases of hepatocarcinogenesis,” reported the study’s authors.

Interestingly, “the compound has no cytotoxic activity, indicating that geraniol exerts mainly cytostatic effects on human colon cancer cells.” A previous study by the same research team reported the anticancer powers of geraniol against chemically induced oral cancer in rats.

A 1997 studyentitled “Antibacterial and Antifungal Activity of Aromatic Constituents of Essential Oils” that was published in the journal Microbiosexplored the ability of several terpenes, including cineole, geraniol, and linaloolto combat a long list of bacteria and fungi.

This thorough study “tested for antimicrobial activity against 18 bacteria and 12 fungi.” The study’s authors reported that these terpenes effectively acted as antibacterial and antifungal agents, treating dozens of types of infections.

Geraniol is a terpene produced by cannabis that has been revealed by decades of research studies to offer a wide range of potential medicinal properties to humans. These benefits include the treatment of major diseases such as cancer and diabetes and improvement in conditions like inflammation and infections.

Despite the fact that it is categorized as a minor terpene, geraniol is responsible for the biosynthesis, or production, of several major terpenes in the cannabis herb, including myrcene and ocimene.