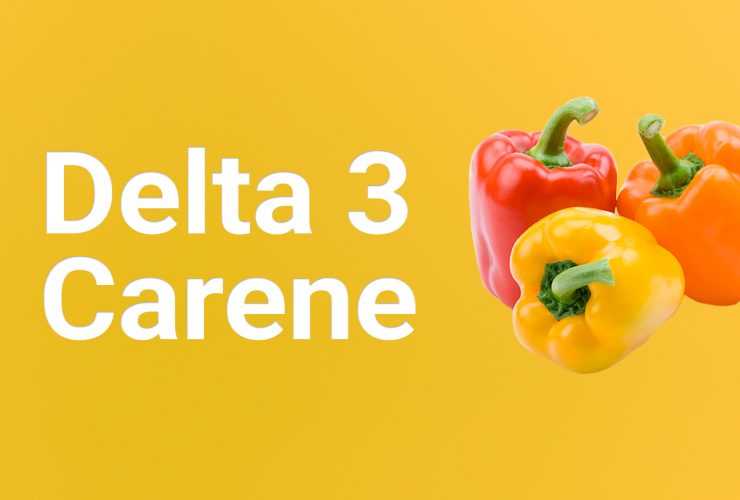 Welcome to Strainprint Technologies’ Understanding Terpenes Series, an ongoing collection of science- and research-based articles regarding the medicinal and therapeutic benefits of hundreds of wellness components from the cannabis plant.

Terpenes are the special molecules responsible for the sometimes pungent aroma of mature female cannabis plants and post-harvest loose-leaf flower. These organic compounds do more than merely tickle the olfactory, however. Like their chemical cousins from cannabis called cannabinoids, terpenes offer a wide range of medicinal efficacy to both patients and adult use consumers.

What is the Endocannabinoid System?

Before exploring the specific characteristics and potential medicinal benefits of the terpene delta 3 carene, it is helpful for readers to understand the biophysical environment and overall dynamics of how such molecules interact with the bodies of humans and common pets such as dogs and cats.

A range of research studies has revealed that terpenes and cannabinoids engage in a delicate and nuanced interaction that has been dubbed the entourage effect. It occurs within a body-wide system of microscopic cellular receptors and neurotransmitters called the endocannabinoid system (ECS or eCS).

The entourage effect is a theory that stipulates that cannabinoids and terpenes commingle in various ways to create enhanced efficacy and other synergistic benefits in the body of any mammal. In a nutshell, this theory purports that the combined benefits of these molecules are greater than the sum of their individual, or isolated, efficacies. In other words, this theory embraces the proverbial saying that “the whole is greater than the sum of its parts.” (Further explorations of this topic by readers should include the issues of bioavailability and subjective efficacy.)

To learn more about terpenes and how they interact with the human ECS, see the following educational articles. They serve as supplements and instructional prerequisites to Strainprint’s Understanding Terpenes Series:

Delta 3 carene, like the other 200 terpenes produced by the cannabis plant genome, has been shown to deliver several medicinal benefits to young and aged patients alike, including those suffering Alzheimers disease, arthritis, osteoporosis, and even fungal infections. This molecule is sometimes represented in research studies as 3-carene or Δ3-Carene.

Cultivars (strains) of cannabis featuring delta 3 carene exhibit an aroma that is often characterized as “sweet and earthy,” with undertones of citrus, pine, lemon, cypress, or wood. It should be noted that the presence and influence of other terpenes—including the relative ratios in which they appear—determines the exact scent conveyed by a particular sample of cannabis. In most cases, no single terpene (even if it dominates others) is responsible for the aroma of a cannabis cultivar.

Users of cannabis varieties that are rich in delta 3 carene often report an aroma that is heavily influenced by cedar, while its flavor is more pronounced by lemon. Plant species other than cannabis that sometimes produce notable quantities of delta 3 carene include basil, bell pepper, cedar trees, rosemary, and turpentine.

Interestingly, delta 3 carene appears to be one of the primary sources of dry mouth and bloodshot eyes (red eye) in the cannabis herb. On the positive side, this terpene has demonstrated the ability to improve mental alertness, memory retention and recall, and overall cognitive function—counter to the stereotypical perception of cannabis as an intoxicating sedative that results in confusion, disorientation, and a “dumbing down” of its users.

Delta 3 carene conveys a wide range of distinct medicinal possibilities, making it of value in the treatment of literally hundreds of diseases and conditions, including those related to or with a root cause of inflammation, neurodegeneration, or bone disease (including the treatment of bone injuries). This terpene has also been shown to provide antifungal properties.

The four dominant potential medicinal benefits of the delta 3 carene terpene are:

One of the most pronounced medicinal efficacies of delta 3 carene is its relatively rare ability to act as a drying and reducing agent against bodily fluids such as menstrual blood, mucus, sweat, and tears. This characteristic is also why cultivars of cannabis featuring significant quantities of this terpene have become infamous for producing dry mouth.

The cosmetics industry includes delta 3 carene in many topical product formulations to draw out liquid and treat or improve skin. This drying behavior also makes delta 3 carene useful as an antihistamine and for wellness products intended to curb mucus production.

Of greater consequence to most patients is the pronounced ability of delta 3 carene to reduce systemic inflammation. This trait alone makes this terpene a potentially effective therapeutic treatment for those experiencing a wide range of diseases, including arthritis, fibromyalgia, multiple sclerosis, and many conditions involving joint discomfort or pain resulting from inflammation.

Another significant benefit of delta 3 carene is its ability to cause or promote neurogeneration and neuroprotection. This results in improved memory (including increased recall) and better overall cognitive function, making this terpene potentially effective as part of the treatment regimens for diseases of dementia, including Alzheimers and Parkinsons.

The fourth major efficacy of this special terpene is its ability to assist with bone repair and to combat bone disease, especially in cases involving injury or poor nutrition. Reported one study, terpenes such as delta 3 carene “significantly stimulate” bone repair and regeneration.

A variety of research studies, spanning back to the 1980s, have revealed the sometimes pronounced and nuanced wellness and health benefits of the terpene delta 3 carene.

A 2006 research study entitled “Antifungal Activity of Juniperus Essential Oils Against Dermatophyte, Aspergillus, and Candida [Fungus] Strains” that was published in the Journal of Applied Microbiology investigated the ability of terpenes such as delta 3 carene and pinene to ward off fungal infections.

The study revealed that essential oils that are rich in terpenes such as delta 3 carene and pinene are effective antifungal agents and successful treatments for fungal infections. Reported the study, “Oxycedrus leaf oil proved to be an emergent alternative as antifungal agent against dermatophyte strains,” stating that delta 3 carene “was shown to be a fundamental compound for this activity.”

The study concluded, “Results support that essential oils or some of their constituents may be useful in the clinical management of fungal infections, justifying future clinical trials to validate their use as therapeutic alternatives for dermatophytosis.”

A 2007 study entitled “Low Concentration of 3‐carene Stimulates the Differentiation of Mouse Osteoblastic Cells” that was published in the journal Phytotherapy Research investigated the ability of delta 3 carene to expedite bone repair and improve overall bone health.

The study reported that “a low concentration (up to 5 µm) of 3‐carene” may “stimulate significantly the activity and expression of alkaline phosphatase,” part of the mechanism of bone repair and regrowth. The researchers concluded that, while further research is necessary to better identify the precise mechanisms by which delta 3 carene is able to improve bone health, “the anabolic activity of 3‐carene in bone metabolism suggested that the use of natural additives to the diet (including essential oils) could have a beneficial effect on bone health.”

A 1989 study entitled “Comparative Study of Different Essential Oils in Bupleurum Gibraltaricum Lamarck” that was published in the journal Die Pharmazie explored the ability of delta 3 carene and its sibling terpene pinene (the most common terpene throughout nature) to treat both “acute and subchronic” forms of inflammation that can lead to or exacerbate a variety of diseases and conditions.

Concluded the study’s authors, “The essential oil of the Cázulas Mountains population was most active against acute inflammation, owing to its high delta 3-carene content.”

Terpenes such as delta 3 carene may offer significant wellness benefits that eclipse their often fragrant aroma. Cultivars of cannabis that produce relatively plentiful volumes of this terpene are known to result in the negative symptoms of red eye and dry mouth.

Those seeking relief from diseases of cognitive deficiency (especially those related to aging), bone injuries, conditions involving inflammation (most notably arthritis and multiple sclerosis), and skin conditions (especially those involving fungal infections) may gain the most benefit from this special molecule that is produced by plants such as basil, cannabis, and rosemary.