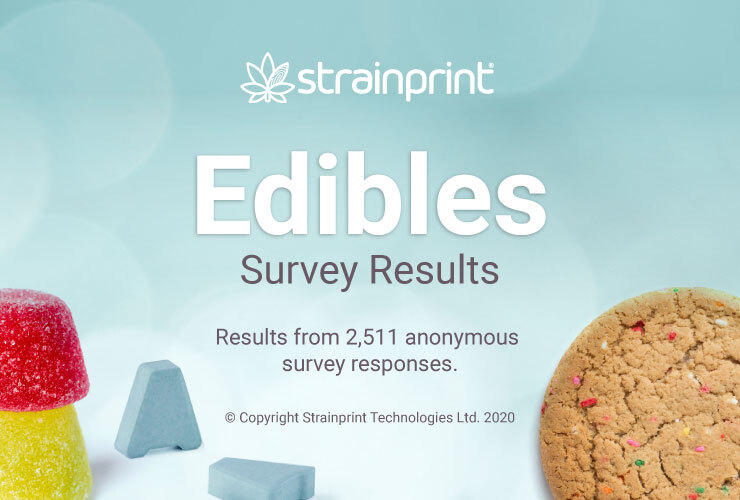 Cannabis-infused food or beverages, or more simply just called ‘edibles’ are now legal products in Canada and some US states.  Cannabis edibles have started popping up in innovative food types and yummy flavours and are consumed for both medical and recreational purposes.

We wanted to understand more about what Strainprint app users thought about edibles, so we sent out a survey to find out! We received 2500 responses and just over 75% of those responded that they do indeed consume edibles.

When asked which types of edible product they consume, respondents were able to select as many as they wanted, and many people consume more than one type.  Gummies or soft chews took the number one spot with 62% of people surveyed reporting that they consume these. Following close behind is the classic ‘pot brownie’ at 54%, although today other types of baked goods, like cookies or squares, are also available.  Under half of respondents (41%) have eaten cannabis-infused chocolates, and only about one in four people surveyed consume non-gummy candies (23%) and cannabis-infused beverages (23%).

Among the most and least popular formats, we saw noticeable age preferences.  Older app users consume most of their edibles as gummies, while drinks are more common with the youngest ages.

The survey also asked why people are choosing edibles and three out of every five people said that they used them because they are discreet – no one has to know!  Those aged 55+ were not as concerned as the younger cohorts with consuming cannabis inconspicuously. When cannabis is ingested as an edible, the effects can last much longer than the traditional way of inhaling cannabis joints. In fact, 54% said that this long-term effect was one reason why they used edibles.

The packaging of edibles must disclose the amount of THC or CBD per piece.  The labelled dose per edible takes the guesswork out of figuring out how much you need to take to feel the effects.  This ease of dosing is more important to the older consumer.

Finally, we wanted to know why people choose the edible products they do, and the overwhelming majority (88%) select their product based on dose, which makes sense since it’s important to be able to know how much you are consuming.  Taste was also mentioned as something important in the selection process (69% said this), as was product consistency (61%) since sometimes products are known to vary in their outcomes.  Flavour options and nutritional value had less importance overall, but were more important to those who consumed drinks.

Our survey respondents skewed to women at 58% of total responses. Among those who consume edibles, there was also a female skew of 57%, however, there was no difference in age distribution between males and females.

If you’re a #DataNerd who finds these survey results as interesting as we do, make sure you follow Strainprint to stay up to date on new surveys, blog posts, and to find out how you can participate and contribute towards furthering the science around cannabis. 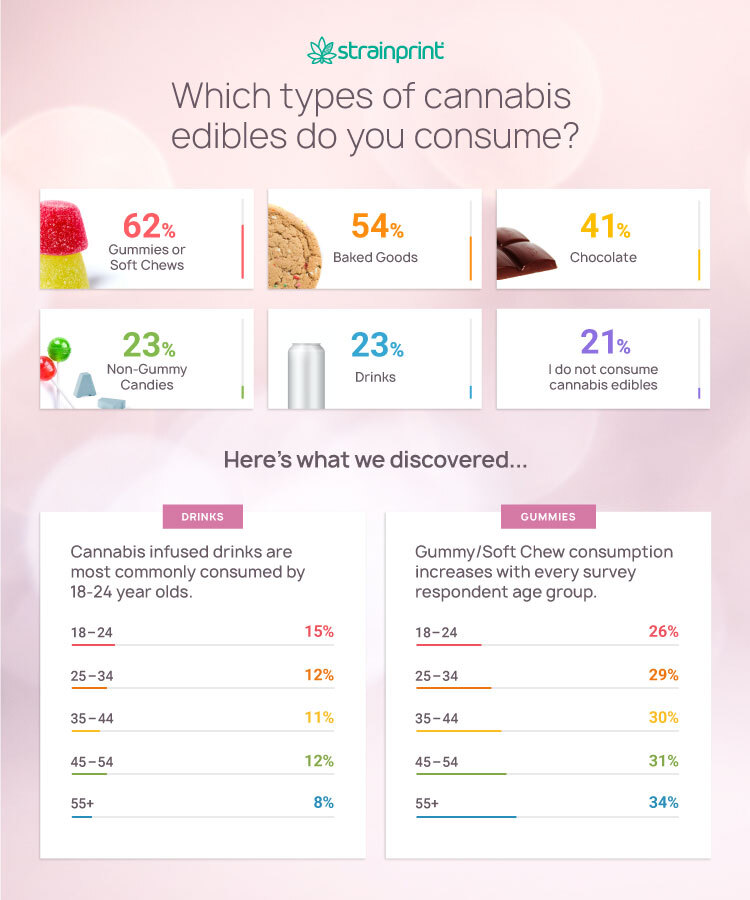 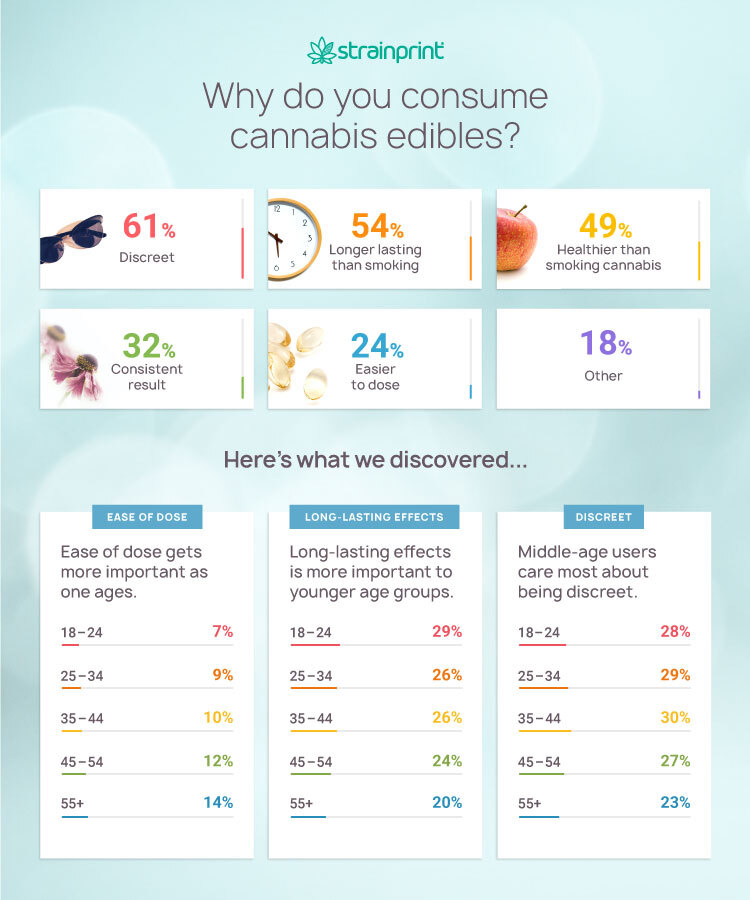 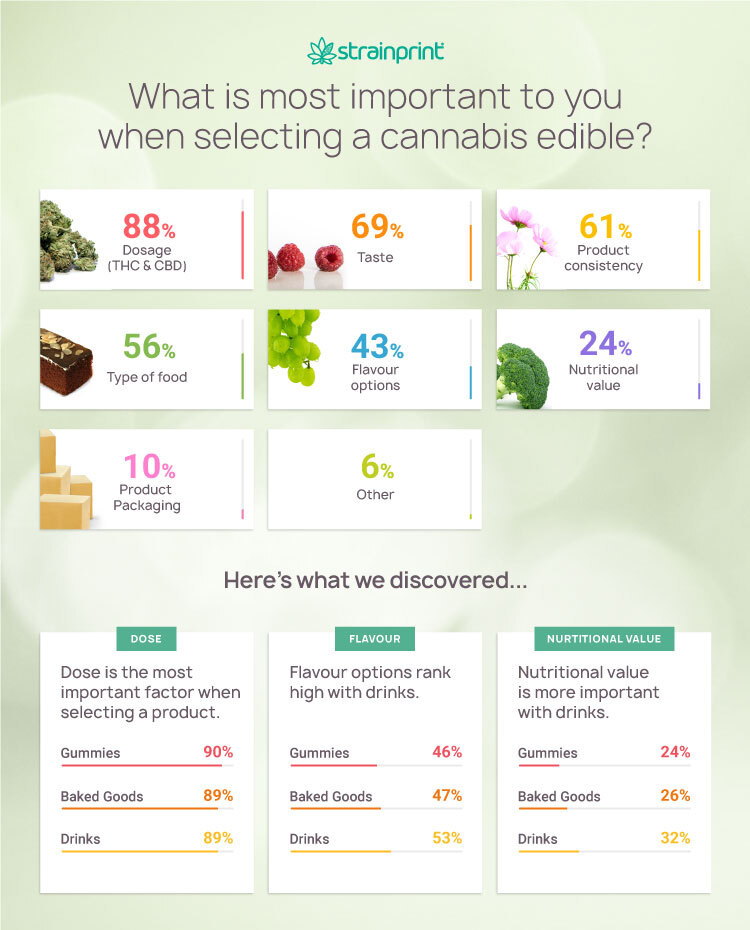