Before diving into the details behind linalool, the terpene produced by cannabis known for its anti-inflammatory and sedative powers, it behooves readers to develop a solid understanding of terpenes as a category of wellness molecule. Patients gain advantage by knowing how terpenes compare to the other group of healthy chemicals produced by cannabis called cannabinoids (including tetrahydrocannabinol [THC] and cannabidiol [CBD]).

Linalool is categorized as one of the 10 “minor” terpenes produced by the cannabis plant, meaning it is available in smaller quantities than “major terpenes such as limonene, myrcene, and pinene. Significant medicinal benefits are derived from linalool, making it one of the top terpenes of interest to patients and those seeking to balance their ECS in an effort to achieve health and wellness. 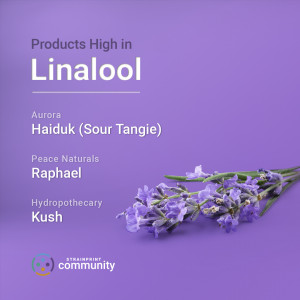 While linalool delivers a wide range of benefits for patients, its core efficacy is relaxation and a reduction of anxiety. In sufficient quantities, it can be used as a sedative and is helpful for insomniacs.

Linalool has also been shown to be a capable treatment for Alzheimers, the progressive brain disease that causes severe memory and cognitive problems. When administered properly by a medical professional or experienced caretaker, linalool’s sedative effects are significant enough for it to serve as a tranquilizer and effective enough to help patients suffering from conditions as severe as psychosis.

This terpene also serves as an analgesic, anti-convulsant, antidepressant, and anti-inflammatory, making it of value in the treatment of diseases and conditions ranging from anxiety, arthritis, clinical depression, Dravet Syndrome, dystonia, epilepsy, and fibromyalgia.

Several studies have revealed the medicinal properties of linalool. Modern clinical research has identified this terpene as helpful in the treatment of a wide range of serious diseases, from Alzheimers to the lung damage caused by tobacco smoking to a reduction of opioid cravings in post-operative patients.

A 2016 study published in the journal Neuropharmacology entitled “Linalool Reverses Neuropathological and Behavioral Impairments in Old Triple Transgenic Alzheimers Mice” examined the link between linalool and a reversal of mental and emotional degradation that accompanies this common and severe disease of the brain. Concluded the study’s researchers, “Together, our findings suggest that linalool reverses the histopathological hallmarks of [Alzhemiers] and restores cognitive and emotional functions via an anti-inflammatory effect. Thus, linalool may be an [Alzheimers] prevention candidate for preclinical studies.”

A 2007 study published in the journal Obesity Therapy entitled “Treatment with Lavender Aromatherapy Reduces Opioid Requirements of Morbidly Obese Patients” concluded, “Our results suggest that lavender aromatherapy can be used to reduce the demand for opioids in the immediate postoperative period. Further studies are required to assess the effect of this therapy on clinically meaningful outcomes….”

A 2003 study entitled “Linalool Produces Antinociception in Two Experimental Models of Pain” that was published in the European Journal of Pharmacology found linalool to aid in the treatment of pain based on its anti-inflammatory properties. Concluded the study’s researchers, “The results show that this compound induced a significant reduction of the acid-induced writhing at doses ranging from 25 to 75 mg/kg.”