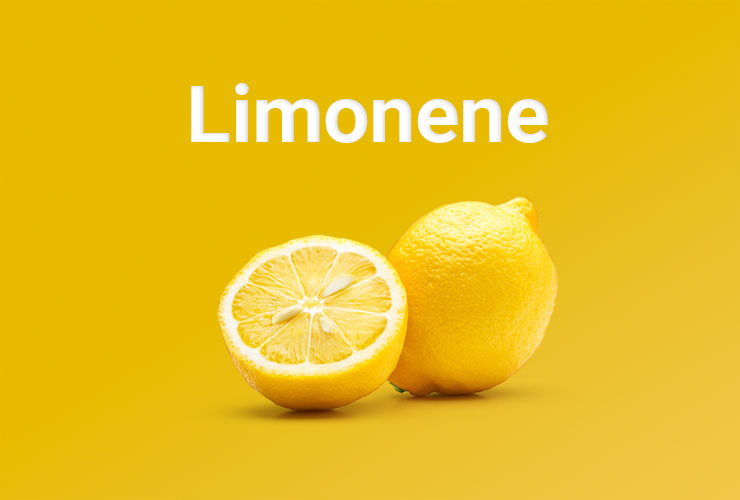 Welcome to the Strainprint Community Understanding Terpenes Series. Before diving into the details behind limonene (sometimes denoted as d-limonene), the molecule produced by cannabis known for its anti-inflammatory properties that has been shown to effectively treat anxiety, breast cancer, and depression, it behooves readers to develop a solid understanding of terpenes as a category of wellness molecule.

Limonene is considered a major terpene based on its commonality, including the significant number of cannabis cultivars in which it is found and the relative volumes in which it appears. As its name suggests, this terpene conveys an aroma of citrus (grapefruit, lemon, lime, orange, and tangerine).

Like other terpenes, limonene is produced by a wide range of plants other than cannabis, including citrus fruits, juniper, lemons, peppermint, and rosemary (it is especially abundant in the rind of these fruits). Limonene is employed in a variety of industries, including cosmetics, food and beverage flavoring, and even household cleaners. 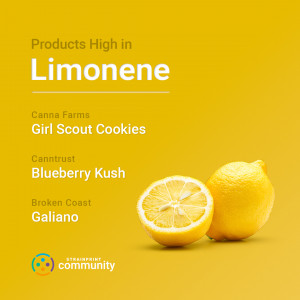 Like other terpenes, limonene conveys many medicinal benefits, including improvements in digestion, mood enhancement (helpful in the treatment of anxiety and depression), and significant anti-inflammatory properties. It is these anti-inflammatory characteristics that give limonene special value for hundreds of diseases and conditions related to inflammation, including cancer, arthritis, and asthma.

In addition, limonene has been found to aid in combating acid reflux (including heartburn) and decreasing anxiety. This valuable terpene has also been shown to dissolve gallstones and is a mild appetite suppressant. (Along with the cannabinoid THCV, limonene may be effective as an ingredient in future weight loss drugs and therapies, especially for patients with type 2 diabetes.)

A 2014 French study published in the journal Anti-inflammatory and Anti-allergy Agents in Medicinal Chemistry entitled “Skin Repair Properties of d-Limonene and Perillyl Alcohol in Murine Models”reported that limonene possesses anti-inflammatory qualities and can be of value to cancer patients.

The study concluded that limonene has a “surprising” capability to prevent tumors from spreading to surrounding tissue via a mechanism of not allowing cancer cells to grow new blood vessels (literally starving them to death). The research also found that limonene can regenerate tissue and heal skin.

A 2011 clinical trial study involving 59 human participants at the University of Arizona entitled “Limonene Study in Women With Breast Cancer” found that limonene may be a promising preventive and therapeutic treatment for breast cancer.

A study conducted in 2010 at Kochi Medical School entitled “Anti-inflammatory Effects of Limonene from Yuzu Essential Oil on Eosinophils”and published in the Journal of Food Science found limonene to be an effective treatment for bronchial disturbances based on inflammation (such as asthma).

Concluded the study’s authors, “These results suggest that limonene may have potential anti-inflammatory efficacy for the treatment of bronchial asthma by inhibiting cytokines, ROS production, and inactivating eosinophil migration.”

A 2007 study entitled “D-Limonene: Safety and Clinical Applications” and published in the journal Alternative Medicine Review reported that “In humans, d-limonene has demonstrated low toxicity after single and repeated dosing for up to one year. Being a solvent of cholesterol, d-limonene has been used clinically to dissolve cholesterol-containing gallstones.”

The study added, “Because of its gastric acid neutralizing effect and its support of normal peristalsis, [limonene] has also been used for relief of heartburn and gastroesophageal reflux (GERD).”