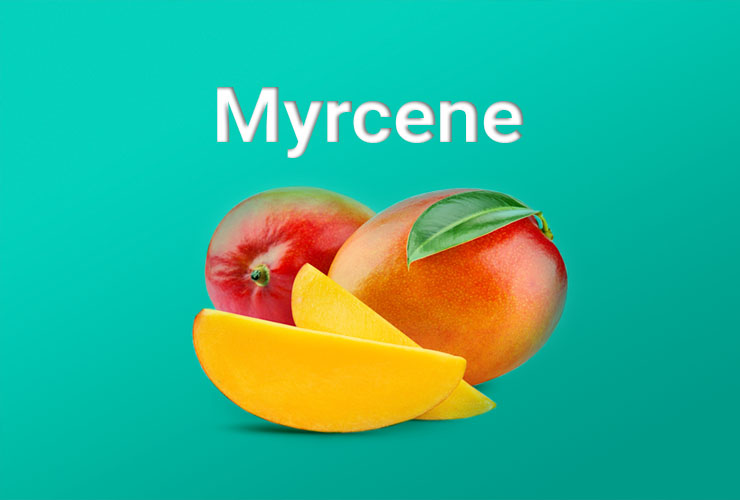 Before diving into the details behind myrcene, the most common terpene produced by cannabis (as measured in weight by volume), it behooves readers to develop a solid understanding of terpenes as a category of wellness molecule and how it compares to the other group of healthy chemicals produced by cannabis called cannabinoids (including tetrahydrocannabinol [THC] and cannabidiol [CBD]).

Of the hundreds of terpenes that appear in the cannabis genome, none is more common than myrcene (sometimes denoted as β-Myrcene). In terms of aroma, this molecule produces an earthy, spicy, clove fragrance in the strains of cannabis in which it dominates. Because all strains of cannabis feature multiple terpenes, the ratios (relative volumes) in which they appear significantly affect the overall fragrance profile and medicinal efficacy of an individual plant. Myrcene is one of roughly 10 primary, or major, terpenes produced by the cannabis herb.

Myrcene is a constituent element of citronella and menthol and is most common in indica and hybrid strains of the controversial plant. Cannabis strains rich in myrcene include Bubba Kush, Cannatonic, Blueberry Lambsbread by Whistler, Harlequin, Canna Bliss by CannaFarms, Pure Kush, Remedy (which also offers copious amounts of CBD), Sensi Star by Canntrust, Skunk (including Skunk #1 and Skunk XL), Special Kush 1, and White Widow.

A 1997 study conducted in Switzerland found that myrcene may constitute up to 50 percent of the terpene volume of an individual cannabis plant. Of equal significance is the fact that myrcene acts as a precursor to the production of other terpenes, similar to how CBG-A is the universal precursor to other cannabinoids, including THC and CBD. 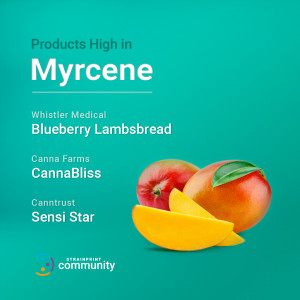 The medicinal efficacy of terpenes and benefits triggered in the mammalian endocannabinoid system (ECS) is surprisingly similar to that of cannabinoids. Myrcene’s major effect is sedative in nature, resulting in relaxed muscles and a reduction of pain. This is of obvious value in a number of conditions involving spasticity, seizure activity, or hyperactivity (including Attention-Deficit/Hyperactivity Disorder [ADHD]), and encompasses common and often debilitating diseases like fibromyalgia and Post Traumatic Stress Disorder (PTSD).

According to Russo, the available data and findings “support the hypothesis that myrcene is a prominent sedative terpenoid in cannabis, and—combined with THC—may produce the ‘couch-lock’ phenomenon of certain chemotypes that is alternatively decried or appreciated by recreational cannabis consumers.”

Many doctors and researchers recommend myrcene for patients who suffer insomnia, restlessness, and a multitude of forms of anxiety. According to Leafly, “Pair this famously anti-inflammatory terpene with herbal concoctions containing lemongrass or hops for a powerful calm that may put those numbered sheep to rest.”

Myrcene is also a proven anti-depressant and anti-inflammatory. Like another terpene, limonene, myrcene has an effect on the permeability of cell membranes, meaning it acts as a regulator of other terpenes and cannabinoids, enhancing or buffering their effects and potency (similar to how CBD modulates THC).

This unique capability of myrcene allows it to increase the volume of THC molecules that reaches CB1 receptors in the brain and central nervous system, effectively magnifying the potency of this cannabis molecule’s psychoactive effect—while simultaneously amplifying its medicinal efficacy. In this respect, myrcene is an excellent demonstration of the entourage effect.

“It’s the perfect example of the entourage effect in which both terpenes and cannabinoids work together synergistically to produce or enhance a particular therapeutic effect that could not be obtained from a single cannabinoid or terpene,” wrote author Gooey Rabinski in 2015.

In addition to its sedative effect, myrcene delivers anti-carcinogenic, antimicrobial, antioxidant, and antiseptic benefits. It can also suppress muscle spasms, meaning it shows promise in the treatment of neurological conditions such as dystonia, epilepsy, and Parkinson’s. It is theorized that myrcene’s sedative effect, which can be tranquilizing, might be helpful in the treatment of psychosis.

According to pioneering testing laboratory Steep Hills Labs in Berkeley, California, cannabis that contains more than 0.5 percent myrcene is categorized as indica, conveying a sedative, tranquilizing effect that promotes appetite and sleep. Cannabis samples featuring less than 0.5 percent will result in a sativa strain, characterized by uplifting, energizing, and cerebral effects.

Of the dozens of urban legends surrounding the cannabis herb and the consumption thereof, a few are actually true. Myrcene is produced in high amounts not only in cannabis, but also in basil, bay laurel leaves, hops, lemongrass, mangos, parsley, sweet basil, wild thyme, ylang-ylang, and several other plants. Because mangos produce a significant quantity of myrcene, patients who consume the fruit amplify the potency of any THC they inhale or ingest.

“For most people, the consumption of a fresh mango, 45 minutes before inhaling cannabis, will result in a faster onset of psychoactivity and greater intensity,” wrote Steep Hill Labs.

In addition to the Russo study from 2011 cited above, several other research efforts have revealed the medicinal efficacy of myrcene.

A study published in 2008 in the journal Therapeutics and Clerical Risk Management (and also headed by Dr. Ethan Russo) revealed the analgesic properties of myrcene. The study showed that myrcene displays a pain relieving effect that mimics opium—except without the critical side effect of addiction.

A 2002 research study published in the Journal of Phytotherapy and Phytopharmacology supported the sedative effect of myrcene and its effectiveness for those suffering anxiety, insomnia, and other sleep disorders. “Similar effects were observed for myrcene and limonene at the highest dose (200 mg/kg body wt.), which increased the sleeping time around 2.6 times,” reported the research.