Welcome to the Strainprint Community Understanding Terpenes Series. Before diving into the details behind beta-caryophyllene (BCP, caryophyllene, or β-caryophyllene), the molecule produced by cannabis known for its categorization as both a terpene and a cannabinoid that provides pain killing and anti-inflammatory benefits, it behooves readers to develop a solid understanding of terpenes as a category of wellness molecule.

The most distinguishing characteristic of BCP is the fact that it can be categorized as both a cannabinoid and a terpene. This terpene conveys a peppery aroma that is sometimes described as spicy. In addition to cannabis, BCP is produced by basil, black caraway, cinnamon, clove, copaiba, hops, lavender, oregano, rosemary, and ylang-ylang.

This special component of the cannabis plant was first discovered in 1964 by pioneering Israeli academic researcher Raphael Mechoulam, who identified it as a terpene. It wasn’t until 2008 that a study by a group of German scientists observed the rare behavior and characteristics that indicated that BCP can also be labeled a cannabinoid.

Perhaps due in part to its unique dual-role as a terpene and a cannabinoid, BCP exhibits a wider range of medicinal benefits than most of its peer molecules.

It has proven to be an effective pain killer, especially when paired with other analgesic cannabinoids and terpenes (most notably THC).

A combination of anecdotal evidence and research has indicated that BCP’s health benefits include analgesia and a reduction in systemic inflammation. BCP has also been shown to be helpful in the treatment of anxiety and depression (conditions affecting hundreds of millions of North Americans).

This quirky terpene may also play a role in helping patients recovering from addiction to alcohol. In sufficient doses, BCP can also induce sleep, of obvious value to insomniacs. In addition, it has been found to act as an antifungal and antimicrobial.

Technically a bicyclic sesquiterpene, BCP binds with the CB2 receptors of the ECS. This has several beneficial effects, one of which is to increase production and availability of the internally produced endocannabinoid anandamide. Anandamide is a beneficial cannabinoid that plays a critical role in the management of anxiety, appetite, depression, sleep, and pain and is sometimes referred to as the “bliss molecule.” An accurate mnemonic trick is to consider anandamide the human body’s version of the cannabis plant’s THC molecule.

Beta-Caryophyllene is often present in strains with spicy, peppery notes, and Strainprint users rate strains with high percentages of BCP and THC as being good for pain management, as well as having anti depressant properties. Hunter’s Corner from Organigram, OG Kush from Canna Farms, and Canntrust’s Warlock are all top rated Caryophyllene dominant strains. 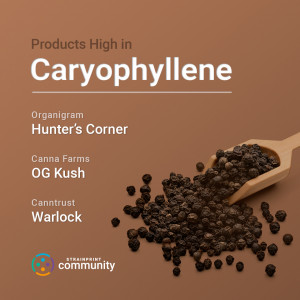 Several studies conducted during the past decade have revealed the medicinal efficacy of BCP for a variety of diseases and conditions related to (or resulting in) anxiety, depression, pain, and systemic inflammation.

A 2018 study published in the British Journal of Pharmacology and entitled “β-caryophyllene Protects Against Alcoholic Steatohepatitis by Attenuating Inflammation” found that BCP shows promise in the treatment of diseases and conditions associated with inflammation and “oxidative stress.” The research also revealed this unique terpene’s potential role in helping those with liver disease.

Concluded the researchers, “Treatment with BCP alleviated the chronic and binge alcohol-induced liver injury and inflammation,” indicating how this terpene might help those attempting to overcome addiction to alcohol.

The researchers demonstrated that BCP, administered orally, exerts analgesic effects in animal models of inflammatory and neuropathic pain. Concluded the study, “To our knowledge, this is the first demonstration that a common food ingredient is highly effective in animal models of chronic pain at physiologically relevant doses.”

Research results published in 2014 in the journal Physiology and Behaviour entitled “β-Caryophyllene, a CB2 Receptor Agonist Produces Multiple Behavioral Changes Relevant to Anxiety and Depression in Mice” revealed that BCP plays a beneficial role in the treatment of anxiety and depression based on how it binds with the CB2 receptor of the ECS, including how it influences the production and availability of anandamide.

Reported the researchers, “Recent evidence suggests that the cannabinoid receptor subtype 2 (CB2) is implicated in anxiety and depression disorders, although few systematic studies in laboratory animals have been reported.”

The study concluded, “These preclinical results suggest that CB2 receptors may provide alternative therapeutic targets for the treatment of anxiety and depression. The possibility that BCP may ameliorate the symptoms of these mood disorders offers exciting prospects for future studies.”

A 2014 study entitled “The Cannabinoid Receptor 2 Agonist, β-caryophyllene, Reduced Voluntary Alcohol Intake and Attenuated Ethanol-induced Place Preference and Sensitivity in Mice” that was published in the journal Pharmacology, Biochemistry, and Behavior further revealed the role of cannabinoids like BCP and how they bind with the CB2 receptors of the ECS. The research emphasized the potential role of BCP in treating recovering alcoholics and those suffering from liver disease.

In this study, researchers injected BCP into animal models (mice) and discovered that its activation of CB2 receptors within the ECS resulted in “decreased alcohol consumption and preference.”

The study concluded, “Several recent studies have suggested that brain CB2 cannabinoid receptors play a major role in alcohol reward. In fact, the implication of cannabinoid neurotransmission in the reinforcing effects of ethanol (EtOH) is becoming increasingly evident. The CB2 receptor agonist β-caryophyllene (BCP) was used to investigate the role of the CB2 receptors in mediating alcohol intake and ethanol-induced conditioned place preference (EtOH-CPP) and sensitivity in mice.”

A 2009 study entitled “Emerging Role of the CB2 Cannabinoid Receptor in Immune Regulation and Therapeutic Prospects” that was published in the journal Expert Reviews in Molecular Medicine found that BCP and its binding affinity for the CB2 receptors located throughout the organs and tissues of the immune system was effective in combating systemic inflammation and acted as an analgesic.

“There is now a large body of data that indicates that the CB2 cannabinoid receptor type 2 (CB2) is linked to a variety of immune functional events. This functional relevance appears to be most salient in the course of inflammation, a process during which there is an increased number of receptors that are available for activation,” concluded the researchers