Terpenes & The Entourage Effect: What’s all the Fuss 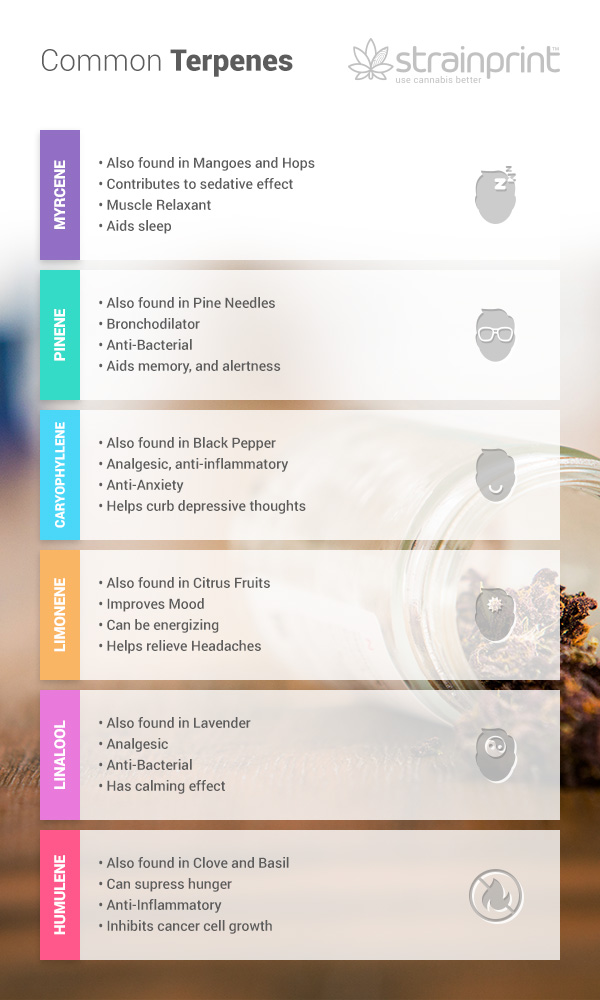 If you have a medicinal, recreational or scientific interest in the cannabis plant, the term “terpenes” has most likely popped up as you educate yourself on cannabis and the way it interacts with the human body.

The importance of terpenes in all species of plants, especially cannabis, can’t be underestimated. Terpenes are fundamental building blocks of the cannabis plant and have a very important and influential role to play in the plant’s overall biological makeup and all compounds that are derived from it.

What Exactly are Terpenes in Plant Science?

Terpenes are essential building blocks of many different plant varieties and are essentially what gives each plant their special aroma and flavor. Technically, terpenes are groupings of hydrocarbons that give plants their specific flavors and aromas.

Lemons are a fantastic example of illustrating the power of terpenes in a relatable way. Without terpenes, a lemon would not have the flavor and scent profile that we all associate with the lemon. It’s the terpene called Limonene that is responsible for that special flavor and aroma. Limonene is also a terpene that is present in cannabis.

Pinene is another example of a common terpene that is also present in cannabis. Pinene gives off an earthy smell that is very specific to many coniferous trees and bushes all around the world. When describing the scent and aroma of pine, some say the aroma is similar to vanilla. Others say that there are hints of butterscotch. In addition to its powerful scent and aromas, it produces many beneficial effects in the context of cannabis which we will cover below.

Common Terpenes In Cannabis & Their Aromas and Effects

Depending upon the strain of cannabis, there can be vast amounts of terpenes present. Each one is different and lends itself to a scent or flavor. And each one has different reported characteristics and benefits.

While there is a myriad of terpenes present in the cannabis sativa plant, more than 120 at current count, there are a few we should look at more closely, as they are showing extremely beneficial results for medical marijuana users.

Here are some of the notable terpenes found in cannabis:

Commonly found in the resin of coniferous trees like the pine tree, α-pinene (“Pinene”), a primary isomer, can be found in cannabis, sage, eucalyptus, olive, rosemary, sassafras, and bergamot, to name a few. β-pinene, a secondary isomer, is found in hops and cumin. Pinene is a very prevalent terpene and has been harvested for centuries, used in alternative and holistic healing.

Pinene’s benefits are numerous. It offers antioxidant, antibacterial, antibiotic, and anti-inflammatory properties. Pinene is also increasingly studied and recognized in the medical community for its ability to aid in the slowing of cancer cell growth. In addition, Pinene is also known for its expectorant and Broncho dilative properties, helping those with respiratory issues.

When present in the cannabis plant, Pinene is known to counteract the psychoactive effects of THC, helpful to those who prefer to stay grounded while undergoing its effects.

This is a spicy, often floral scent, found in many plants including mint, rosewood, lavender, and cinnamon. It has sedative and calming effects, used as a sleep aid for centuries.

Linalool is known for its anti-depressant, anxiolytic, and anti-inflammatory properties. It offers pain relief and is studied for its ability to inhibit cancer cell growth and regeneration.

Humulene has been used in holistic healing for thousands of years because it possesses powerful anti-inflammatory and antibacterial properties and can be utilized as a pain reliever and tonic.

Found in apple, tea tree, cumin, some citrus fruits, oregano, and marjoram, this smoky and woody terpene is also common to the cannabis plant.

It is known for its sedative effects, as well as anti-bacterial, anti-fungal, and antioxidant properties.

Limonene, which we’re already familiar with, is one of the most common and well-known terpenes. Found in citrus rinds, juniper, and peppermint, Limonene can be found in numerous foods, fragrances, and household cleaners. Limonene is known for its strong citrus aroma.

Limonene possesses a wide array of benefits, including its overall beneficial effects on the entire gastrointestinal system. Limonene also has antidepressant, anxiolytic, anti-fungal, and anti-inflammatory properties. In addition to all that, it is also sometimes used as an anti-proliferative and immune-stimulant, helping to protect from the carcinogens found in smoke. Limonene also helps with mental focus, concentration, and clarity.

Although the benefits of terpenes are impressive in isolation, the Entourage Effect displays how, when combined with other terpenes or synergized with cannabinoids such as THC and CBD, that there is a definitive increase in beneficial properties, which means that the medicinal value of the cannabis plant drastically rises when the Entourage Effect comes into play.

When terpenes work together in harmony with cannabinoids, medicinal properties seem to augment their effectiveness, making the cannabis plant a true healer.

Research and Findings on The Entourage Effect

In 2010, Dr. Ethan Russo, a prominent neurologist, published his findings in the British Journal of Pharmacology. Dr. Russo studied the far-reaching effects of combining various compounds to produce the Entourage Effect. Different combinations include;

Whole plant therapy is an increasingly more important category in medicine today. As science continues to study and reveal the benefits of the Entourage Effect and how cannabinoids exist on and perform at a molecular level, we are better able to learn how it affects the endocannabinoid system, both directly and indirectly.

Medically accessing the benefits of the Entourage Effect could greatly augment the positive and far-reaching potential that terpenes found in cannabis have on the body when they interact with other cannabinoids.

In short, terpenes are important. They have also been used for thousands of years in traditional remedies and herb-based medicines and now, thanks to technology and further research, we can finally understand the therapeutic benefits of terpenes so that they can take their rightful therapeutic place in science, health, and wellness.

Terpenes and the Strainprint App

The Strainprint app is evolving to ensure that medical marijuana users can access up to date data and accounts of others’ experiences with certain strains.

When researching your strains, do additional work to understand the terpenes that are present within each strain and the levels they exist in. Record your feelings and what you notice about the strain’s effectiveness when taking certain strains and be sure to record in the Strainprint app.

Together, we can add to the body of knowledge on terpenes and certain cannabis strains for medical marijuana through the Strainprint app!