In 2015, Alison saw the potential for the legal cannabis industry. She was in the process of wrapping up a technology start-up that she had co-founded and was looking for her next big project. As she researched cannabis, she saw a massive business opportunity. That led her to found Cannabis At Work, a company that leverages her expertise in the field of HR as well as her experience in consulting, facilitation and training. At that time, years ahead of legalization, there was some risk in starting a company focused on the cannabis industry. She often jokes about being viewed as “that crazy HR weed lady”. Yet, Alison, is no stranger to risk. Having launched two companies previously, she understood both the upside potential as well as the downside risk and true to her entrepreneurial spirit, she decided the trade-off made sense.

Its been a wise bet. Since it’s inception, Cannabis At Work has been on a wild growth trajectory. The company was originally focused on education, conferences, and consulting, but has since evolved to add recruitment services for the cannabis industry. It has significant experience working in the regulated cannabis sector with licensed producers, applicants, ancillary businesses and the retail sector. The company has developed a large database of qualified candidates for cannabis specific roles such as quality assurance, cultivation, laboratory personnel, security personnel, and people with RPIC status. Cannabis At Work is known as the “go-to” source to quickly find qualified cannabis industry professionals. The company recruits coast-to-coast, with the team based in Edmonton and Toronto.

Alison’s commitment and support of the nascent cannabis industry itself was evident from the start. She founded a local Women Grow chapter and networking group, Cannexions, as a way to start a professional conversation about cannabis in Edmonton. That philosophy continues today. In conjunction with Cannabis At Work, she has recently launched the first network for HR professionals in the cannabis industry – the Cannabis Industry HR Network. Its another opportunity for the community to learn and grow together.

As an industry veteran, Alison is an internationally sought-after speaker, commentator and panelist. She’s been featured in the Globe & Mail, Huffington Post, Financial Post, CBC, Business News Network (BNN), Leafly, an upcoming Vice documentary and by many other media outlets. She serves on the Board of Directors for Canadians for Fair Access to Medical Marijuana (CFAMM) and is a Mentor for the Leaf Forward cannabis incubator.

Though she’s one of the busiest people in the industry, its not all work all the time for Alison. She can often be found on the slopes of Whistler, on her snowboard or relaxing in the outdoors on her acreage just outside of Edmonton.

Posted in: Cannabis At Work 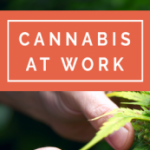